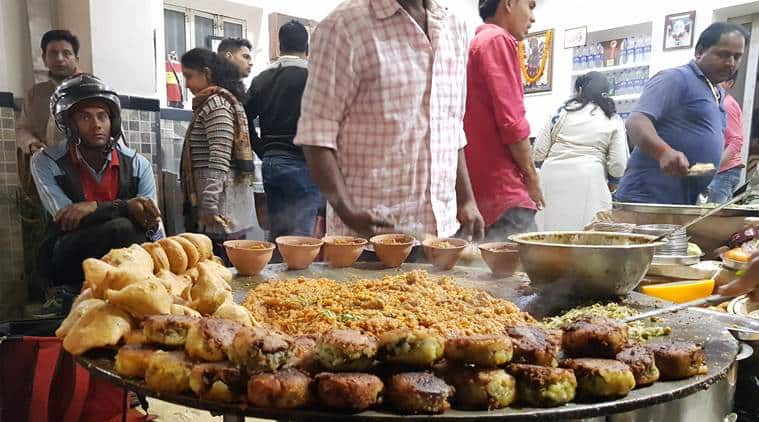 When it comes to eating out, only two parts of Varanasi really count – Dashashwamedh Ghat and Chowk. And the five-decade old Deena Chat Bhandar, one of the most iconic of the many popular eateries in the city, has an outlet in each location. If a typical day in the city starts with a helping of kachori-sabzi-jalebi at the hundreds of places selling this favourite breakfast combo, it mostly ends with a serving of tamatar chaat at one of Deena’s two outlets, where virtually the entire town converges every evening to savour the delicacy.

While Deena serves a plethora of other snacks such as chhole-tikki, paalak-patta chaat and choora-matar, tamatar chaat has remained its bestseller for the last 50 years. It was in the late ’60s that Deena Nath Kesari began hawking tamatar chaat, tikki-dahi and kachori-dahi on a small khomcha (a mobile stall borne on the head) every evening, in the lanes and bylanes of the same Luxa Bazaar where the swanky new shop stands now.

Today, the staff of 10 serving at the shop hardly has a free moment on its hands, running around with pattals (leaf plates) of tamatar chaat and tikki-dahi to serve a mix of locals, pilgrims and backpackers alike. Atul Kesari, one of Nath’s grandsons who handles the business now, says, “After many years of running around with the khomcha, Dadaji bought a small shop in Chowk. But we introduced seating only at this bigger Luxa Bazaar outlet. Besides catering to a full house of patrons for six hours every evening, we also accept party orders now.” It’s no wonder that chefs Ranveer Brar and Sanjeev Kapoor spent a day in Deena’s kitchen to learn the recipe and recreate a fusion version of the tamatar chaat for one of their TV shows.

What is it that gives this dish its unmatched taste? Like with most popular dishes, the recipe for the tamatar chaat too is a closely-guarded family secret. “The combination of meetha, teekha and khatta is not everyone’s game. We use the same recipe created by Dadaji and even make all our masalas in-house,” says the 30-something Atul. Legend has it that the enduring allure of tamatar chaat lies in the painstaking attention with which its gravy is prepared. This gravy, which takes several hours and many tastings to get right, includes dried fruits, mustard oil, desi ghee, lime juice and jaggery. Atul says his grandfather has handed down a list of ingredients to be used in the gravy to the family, while the method is something they learnt by watching him all those years.

To keep up with the tastes of the times, Deena has added a section of Chinese dishes to its menu. It also now serves bottled water. But the experience remains traditional. On a busy day — which is virtually everyday — patrons are encouraged to share tables rather than wait for separate seating. Many still prefer to stand outside, near the giant wok in which the tikkis are fried, and eat panipuri and tikki-dahi while taking in the hustle and bustle of the market around them.