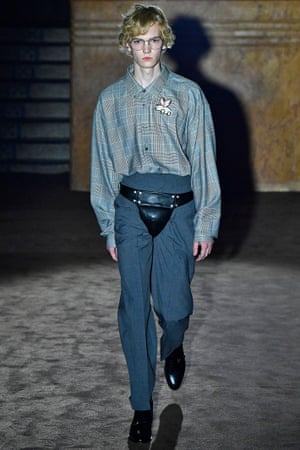 Fashion has embraced the codpiece again, centuries after it fell out of style.

Gucci’s Alessandro Michele revived the accessory for his spring/summer 2019 show: rendered in leather and snakeskin, worn harness-like and evoking Robert Mapplethorpe; in shiny diamante, hanging like a glitter ball; and framed like a seashell clutching the symbolic pearl.

The American designer Thom Browne also featured them in his spring/summer 2020 show, which nodded to deconstructed sportswear. His models wore them over pleated tutus and bell-shaped suit-dresses, accessorised with papier-mache-looking football helmets, broken umbrellas and headbands in the red, white and blue of the US flag.

Browne used the item as a focal point for his show, which revolved around sexual identity. “The codpiece is a whimsical representation of masculinity,” he said. And at the height of its popularity in the 1540s, the item indicated machismo to its Renaissance audience.

Victoria Bartels, the author of What Goes Up Must Come Down: A Brief History of the Codpiece, said: “The interesting thing about 16th-century male fashion is the way in which it reveals what was important to men at this time: their preoccupation with masculinity, military prowess and virility.”

And it was about signalling power to other men, rather than being a symbol of fecundity. Henry VIII wore it in several portraits, including Hans Holbein the Younger’s Portrait of Henry VIII, c 1536-1537.

Michael Glover wrote in his book Thrust: A Spasmodic Pictorial History of the Codpiece in Art: “[The painting] perfectly focuses our attention on the principle object of interest: Henry’s codpiece.” Glover argued Henry’s codpiece was weaponised, creating the feeling of “codpiece envy” in his enemies and subjects.

“I think that they were intended to induce awe,” he said. The book also talks about the fraudulence of the codpiece as an item that promised more than it delivered and contributing to a fabricated, fictionalised version of the male body.

“It encouraged concentration on the organ of generation, as if to prove at a stroke or a single overwhelming thrust, and beyond doubt, that man was a mighty and unstoppable factory and machine,” he wrote.

This idea of signalling masculine power in the absence of real substance is something that has been used by modernist practitioners of the codpiece, from Blackadder to Darth Vader and Michael Jackson, whose dance moves focused on his crotch even when he was not wearing his golden codpiece.

“He was a particularly sad case of self-reconstruction,” Glover said about Jackson. “Every bit of him, from nose to skin to groin, had to be made brightly anew for fandom’s sake.”

Shakespeare also picked up on the codpiece. He referenced its dual properties of deception and braggadocio in King Lear and Measure for Measure. In The Two Gentlemen of Verona, Lucetta makes a male costume as a disguise for Julia and says: “You must needs have them with a codpiece, madam … A round hose, madam, now’s not worth a pin unless you have a codpiece to stick pins on.”

Glover said: “Shakespeare was the great, instinctive etymologist. He knew how words tricked with their double and triple meanings: ‘cod’ as scrotum, ‘to cod’ meaning to cheat.”

The current revival in menswear for this 16th-century piece follows the womenswear trend for “Renaissancecore”. The era has been mined by designers from Alexander McQueen to Vivienne Westwood and Simone Rocha. Explaining fashion’s obsession with the era, the designer Gareth Pugh said: “The Tudors were the first power dressers.”

… will these define the 2020s? This has been a turbulent decade across the world – protest, austerity, mass migration. The Guardian has been in every corner of the globe, reporting with tenacity, rigour and authority on the most critical events of our lifetimes. At a time when factual information is both scarcer and more essential than ever, we believe that each of us deserves access to accurate reporting with integrity at its heart.

We have upheld our editorial independence in the face of the disintegration of traditional media – with social platforms giving rise to misinformation, the seemingly unstoppable rise of big tech and independent voices being squashed by commercial ownership. The Guardian’s independence means we have the freedom to set our own agenda and voice our own opinions. Our journalism is free from commercial and political bias – never influenced by billionaire owners or shareholders. This makes us different. It means we can challenge the powerful without fear and give a voice to those less heard.

None of this would have been possible without our readers’ generosity – your financial support has meant we can keep investigating, disentangling and interrogating. It has protected our independence, which has never been so critical. We are so grateful.

You’ve read 103 articles in the last four months. More people than ever before are reading and supporting our journalism, in more than 180 countries around the world. And this is only possible because we made a different choice: to keep our reporting open for all, regardless of where they live or what they can afford to pay.

As we end 2019 and enter a new decade, we hope you will consider offering us your support. We need this so we can keep delivering quality journalism that’s open and independent. And that is here for the long term. Every reader contribution, however big or small, is so valuable.