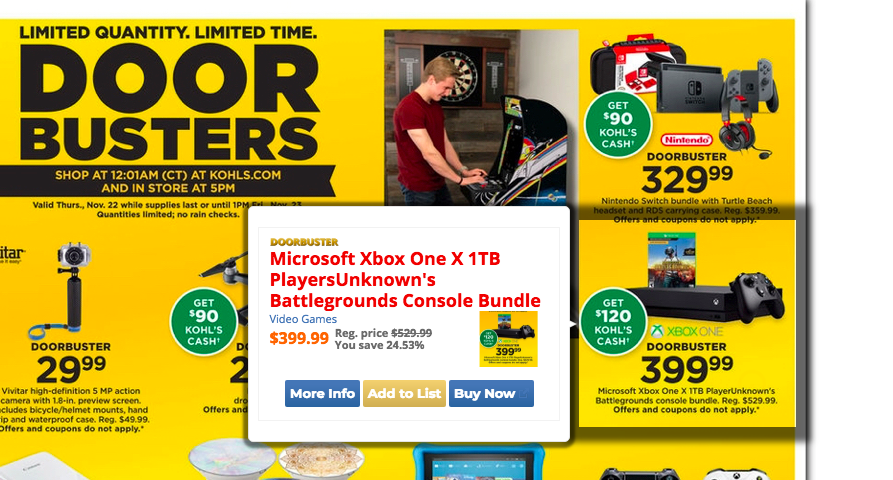 Black Friday leaking season is rolling in earnest, with full ads from places like Target and Costco already in the mix. It’s looking like a good year for console deals, with the Xbox One S, PS4, Xbox One X, and PS4 Pro all mature enough to be pushing for some impressive bundles and discounts as we enter into the golden years of this hardware generation. Today, we’re going to look at the gaming deals from Kohl’s, which are always some of the best on offer.

For Kohl’s full ad scan, head to BestBlackFriday.com. For other tech deals, check out Gordon Kelly.

As in past years, the highlight of Kohl’s Black Friday program is that the retailer will give you $15 in Kohl’s Cash for every $50 you spend, so long as you spend said Kohl’s cash before December 5. At other retailers, this might be somewhat limiting and only qualify as a partial discount, but Kohl’s is a massive operation with all sorts of stuff gaming and otherwise. So you can use your savings to pick up some more games for your new hardware, or you can just buy towels or something. That makes Kohl’s cash not quite as good as regular cash, but close.

Here are some of the best gaming deals:

Hardware is stealing the show here, though we don’t have one of those big lists of discounted games like we see at places like Target, Best Buy, Amazon or Gamestop.

Kohl’s Black Friday deals are available online November 19-23, so you can grab them early there or in-store on Black Friday.