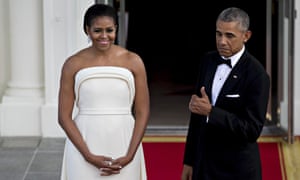 Michelle Obama has recently spoken about the “unfair” fashion standards in the White House. What did she mean?

Oh, the Obamas. A family in the White House who were actually smart, classy, admirable, mature. One who inspired the best of humanity and made you feel like you were in safe hands – feels like something from another century now, doesn’t it? Sorry, I’m going to need a moment. OK! I’m a pro, I can do this – just ignore me if I occasionally burst into sobs, they’ll pass.

So Michelle Obama was interviewed earlier this month and she spoke about the disparity between her and her husband’s experience at red-carpet events: “Now, people take pictures of the shoes I wear, the bracelets, the necklace. They didn’t comment that for eight years he wore the same tux and same shoes,” she said. “He was proud of it, too! He was like: ‘Mmm! I’m ready. I’m ready in 10 minutes, mm hmm. How long did it take you?’ I’m like: ‘Get outta here …’” Can we all just admit that the Obamas are the ultimate #Relationshipgoals?

And of course, as always, Michelle is right. The overwhelming disparity between what is expected of women and men when they dress up for events is never more obvious than when it involves a woman whose previous professional success was never in any way dependent on their looks, as was the case with superstar lawyer Michelle Obama.

Defenders of this system – and, as a fashion columnist, I suppose I should be among them – will say this works in women’s favour, as they get the fun of dressing up and can stand out more. Poor men, wearing the same boring suit all the time and not being judged by the world’s press and able to wear comfortable shoes and not feeling all trussed up like a Barbie and, and, and – sorry, I’ve lost my train of thought. Why am I feeling sorry for men again?

We all know that women go through this because it’s another means of reducing, hobbling and infantalising them. You can’t get much thinking done if you’re worried about how your dress will look on camera and your shoes are breaking your feet. Because as much as I love Barry Obama, I think he and I both know that if his wife hadn’t had to spend about 60% of her time in the White House dealing with her hair and wardrobe, she could have run the country twice as well as him in half the time.

God, it’s hot. What’s the one thing to avoid, style-wise, in this heat?

Rub. Rub is enemy numero uno in the hot weather. Now, nobody wants to be the dick who complains about the bad weather in this country 10 months of the year, only to then immediately start griping about the good weather when the sun finally comes out. But it has to be said, the rub factor has been off the charts for the past two weeks. “What is ‘the rub factor’?” you ask, wiping the sweat away from your wide-eyed innocent expression. Ah, I’m sorry. I forgot I wasn’t talking to experts like myself who had been schooled in official fashion terminology at the Hubert de Givenchy College for Kids Who Can’t Read Good. The rub factor measures how much your clothes are chafing against various parts of your body: your inner thighs, your groin and your armpits, most commonly. Yes, we’re really maintaining this column’s reputation for aspirational glamour this week.

As I was saying, there has been serious rub in Britain of late, to no one’s benefit. And the real problem with rub, aside from the physical discomfort and, in the case of ladies, having occasionally to unpick your clothes out of intimate crevices, is the smell. Nothing makes clothes smell worse than rub. It is a strange but undeniable fact that the sweat you build up from, say, exercise smells literally a tenth as bad as sweat from rub. Seriously, have you been on a train in the past week? I’d rather spend a month breathing only the fragrance from the Wimbledon men’s changing room than spend two minutes on London’s District line at rush hour.

And how fast rub arises! It happens even faster than hairs can sprout on a lady’s face: totally bare-faced at breakfast, full on whisker by dinner time (like I said, it’s all about aspirational glamour this week).

So what to do? Well, the most obvious is to wear loose clothing. It is an annual amazement how many people wear shirts and dresses that jam up tight into their pits. Have these people all had botox injections into their armpits to stop them from sweating, as someone totally unreliable once told me Sharon Stone had done? Or have they never lived through a summer before? Loose armholes, people: loose armholes are you best friends in the summer. And same with legs and crotches (truly one of the loveliest words in the English language). This is why I never understood how some people can find high-waisted and tight hotpants so sexy: sure, everyone can see the shape of your bum, but do you know how much those shorts must reek of grade-A rub? Get away from me, Daisy Duke, and sort out your personal hygiene.

Just get some slim-but-breathable shorts, slim-but-breathable T-shirts, a couple of loose dresses with low-cut armholes (this is where the peasant dress really comes into its own), and you’re set for a minimal-rub summer. Disregard my advice at your own peril, and please don’t sit anywhere near me on the train.