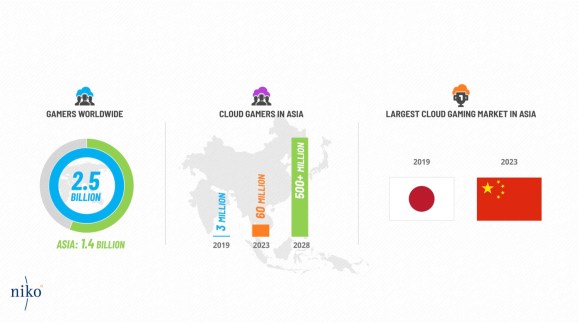 Cloud gaming platform and service revenue in Asia will grow from $270 million and three million consumers in 2019 to $3 billion and 60 million players in 2023, according to a forecast by market researcher Niko Partners.

By 2028, Niko estimates the number of users could surpass 500 million gamers. It expects the growth to happen in part because cloud gaming could remove the cost and platform barriers to gaming that currently exist for many people around the globe.

“Cloud gaming will be of tremendous benefit to gamers who will have access to a large number of high quality titles without the need for expensive hardware,” said Lisa Cosmas Hanson founder and managing partner of Niko Partners, in a statement. “Developers, publishers, and platforms all profit as well with greater reach and more ways to monetize, however the companies that own the most parts of the value chain from IP to infrastructure stand to benefit the most. And as with so many other sectors of gaming, Asia is leading the way.”

Cloud gaming will remove the need for constant hardware upgrades, and players will be able to consume cloud games on existing devices or possibly on future devices that may have low specs and can accommodate games only played in the cloud.

The biggest opportunity is for cloud gaming to access smartphone gamers, who comprise the largest share of the Asia gamer audience, and who would be able eventually to play PC and console games easily on their mobile device.

5G and unlimited data plans are keys to success for cloud gaming in Asia, as most gamers play on mobile devices. The services and investment in the 5G infrastructure are paramount to success.

In an email, Cosmas Hanson said that the forecast assumes that, in order to reach 500 million cloud gamers in Asia, we will see a combination of new gamers coming into the market primarily by smartphone and existing gamers who may reduce their use of single-platform games in favor of games that are playable in the cloud from different platforms.

She also said that currently the cloud gaming experience in Asia is mostly in Japan with consoles. In South Korea, 5G launched in May 2019 and this enables the use of some cloud gaming functionality, but as of yet, not much dedicated cloud gaming is in use.

She said that China is likely to be the biggest market in Asia, and the Asian market by 2028 will be one of the biggest in the world.