Pharmacologic treatments to prevent migraine in children and teens are effective, but so is placebo, complicating the issue for clinicians and families. Guidance from the American Academy of Neurology and the American Headache Society suggests that clinicians should counsel their patients on lifestyle and behavioral factors that contribute to migraine frequency, and it encourages shared decision-making with patients and caregivers regarding the use of preventive medication.

Guideline co-author Andrew D. Hershey MD, PhD, FAAN, FAHS, endowed chair and director of neurology at Cincinnati Children’s, described research in this area as “dynamic,” and he said gaps in the evidence are always being filled.

“The growing number of controlled studies, as well as the FDA and European Medicine Agency approvals of acute and preventive medications, resulted in the need for an update of the analysis and subsequent guideline,” he said in an interview.

To update the guidance, Hershey and colleagues systematically reviewed more than 300 full-text articles. Based on the strength of the evidence and other factors, they assigned “levels of obligation” to each recommendation — A, B, C, U and R — using a modified Delphi technique. 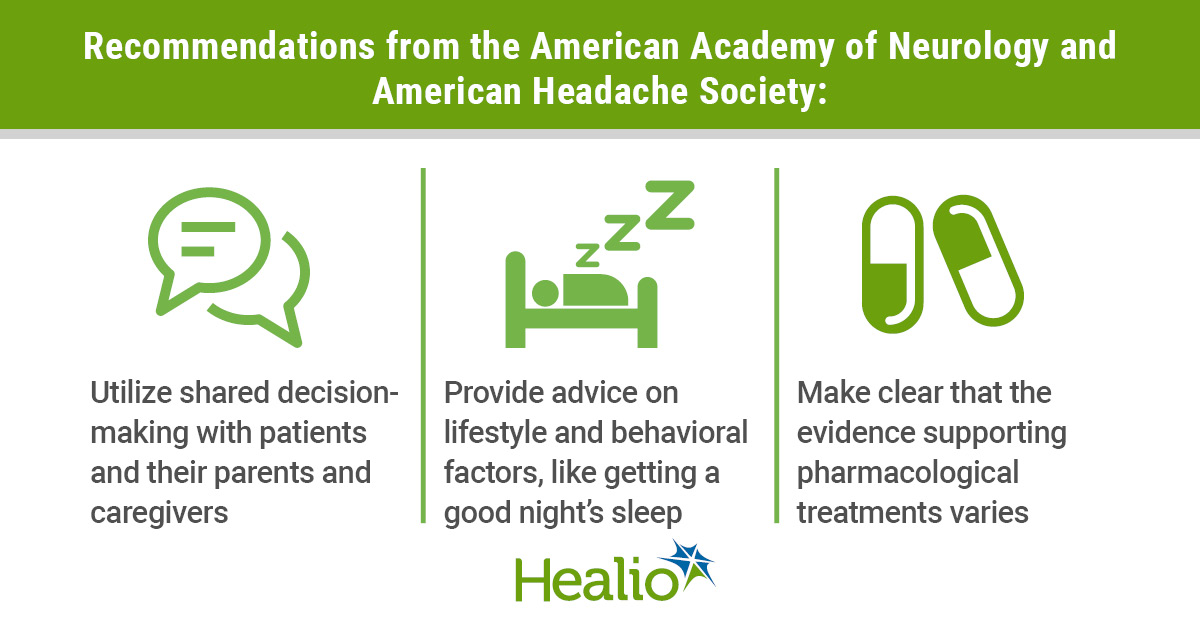 Guidance from the American Academy of Neurology and the American Headache Society suggests that clinicians should counsel their patients on lifestyle and behavioral factors that contribute to migraine frequency, and it encourages shared decision-making with patients and caregivers regarding the use of preventive medication.

The authors assigned “B” levels of obligation to two lifestyle and behavioral areas: identifying and changing factors that contribute to migraines — such as overweight, caffeine and alcohol use, lack of physical activity, poor sleep habits, and tobacco exposure — and educating patients and families about these factors.

According to the guideline authors, “clinicians should inform patients and caregivers that in clinical trials of preventive treatments for pediatric migraine, many children and adolescents who received placebo improved and the majority of preventive medications were not superior to placebo.” This was assigned a level “B” obligation.

The societies also made recommendations regarding the use of migraine preventive treatments in patients of childbearing potential, which included:

The authors added that clinicians must regularly monitor patients to gauge the treatment’s effectiveness, adverse events and the possibility of stopping its use once the patient has control of their migraine.

Pakalnis noted that the guideline did not mention studies involving nutraceuticals or naturalistic therapies like magnesium or riboflavin.

“They are used frequently for migraine prevention,” Pakalnis explained. “Many times, parents will have their child start taking these before a neurologic evaluation since they generally appear to be relatively safe, are inexpensive and available without a prescription.”

Hershey said the treatments were evaluated during the development of the guidelines, “but the studies lacked the pre-defined qualifications to be included in the analysis.”

“This was due to either lack of efficacy or the limitations of the study design. Nutraceuticals are chemical compounds that should be tested as rigorously as pharmaceutical agents and not just thought of as safe,” he said.

Pakalnis also felt the placebo effect deserved more attention than it received in the guideline, since its occurrence is “very high in pediatric migraine research studies.”

“This observation is likely due to the increased expectation of response of medications that have already been approved for use in adults and promoted through pharmaceutical advertising,” he said.

Hershey, who is also director of the Headache Center at Cincinnati Children’s Hospital, said clinicians can expect a revision in the guidelines in another 10 to 15 years.

As many as 3% of children aged 3 to 7 years experience migraine, and between 8% and 23% of children have had a migraine by age 15 years, the guideline authors wrote. – by Janel Miller