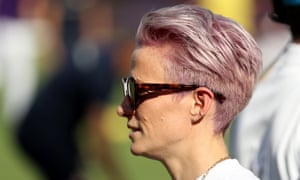 Bigger bottles The Ordinary has launched large versions of its bestsellers. More sustainable and cheaper, too – win-win.

Head-to-toe leather Vegan, that is. See Lady Gaga in Anouki at the launch of her Haus Laboratories cosmetics.

Tinted tresses The shade sported by US football star Megan Rapinoe has been dubbed “rapinkoe”.

Double T-shirting Bradley Cooper had the “gall”, as the Cut put it, to wear a long-sleeve T-shirt beneath a short-sleeved one to dinner with Anna Wintour.

Name necklaces Usurped by initial necklaces, as worn by the Duchess of Sussex at Wimbledon. Sorry Carrie.

The cheese pull The viral food marketing image has fallen out of favour. Goodbye rainbow toasties.