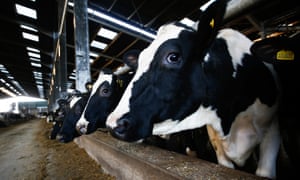 Dairy cows. Milk from cows in Northern Ireland can cross the border five times before going into a bottle of Baileys Irish Cream. Photograph: Bloomberg via Getty Images

Leaving the European Union without a trade deal in place could put up to 97% of British food and drink exports at risk, according to a House of Lords report that lays bare the agricultural industry’s overwhelming reliance on local markets.

As negotiations between the EU and British government appear to take a turn for worse, concerns are growing that failure to reach an exit deal could leave many industries facing steep tariff barriers in future – something government ministers hope could be offset by opportunities in other international export markets.

The latest Lords report on the implications of Brexit exposes particularly high dependency on the single market and associated EU trade deals among British farmers and food manufacturers.

Evidence to the Lords EU energy and environment subcommittee revealed the interconnected nature of much food and drink production that would be threatened by non-tariff barriers. “If you take one example – a bottle of Baileys Irish Cream … if you are a Northern Irish cow, your milk crosses the border five times before it goes into the bottle,” said Ian Wright, director general of the Food and Drink Federation (FDF). “The idea that that would be subject to tariffs hither and yon is really very scary.”

The production of many baked goods could similarly be vulnerable to disruption as raw ingredients such as flour cross EU borders several times before cakes and confectionary appear on supermarket shelves.

It is the impact on farmers that is giving peers most cause for concern, and the report warns of a possible quadruple whammy from Brexit as they lose access to EU farm subsidies, European export markets, access to European workers and protection from a cheap imports from outside the EU.

“Post-Brexit, the UK’s agriculture and food sectors face enormous challenges,” said Robin Teverson, the chair of the committee. “Life after the EU’s common agricultural policy will not be easy for the many UK farmers who rely on its financial support.”

Trade data analysed by the FDF found equally strong ties when finished consumer products were included in the total. It found 70% of food and drink exports went to EU member states, and a further 27% to countries that have a free trade agreement with the EU.

There are 27 such agreements in place, covering 38 countries ranging from Turkey to Morocco to Canada, and the Lords investigation concluded that most of these would lapse once Britain left the EU and would need to be separately renegotiated for exporters to continue to benefit from low tariffs.

Instead, the only access guaranteed in the event of no new trade deals being struck would stem from Britain’s membership of the World Trade Organisation, which has particularly punitive tariffs for many agricultural goods – rising to 30% for much of the dairy industry.

Lord Teverson said the trade numbers were “staggering” and revealed “how totally dependent we are on the EU for our export markets in these animal and food process products”.

Teverson said the impact of Brexit, particularly for sheep, pork and cattle producers, would soon begin to sink in. “All those issues will come about as soon as the negotiations start. At that point a lot of this will become live,” he said in an interview.

The government insists it is still confident of striking a comprehensive new free trade agreement with the EU as well as many new bilateral deals that can replace and expand those already in place. It has also guaranteed to match farm support payments for a limited period.

The Lords report calls for an extensive transition period for farmers to adjust to the host of new challenges on the horizon.

“Farmers risk high tariffs and non-tariff barriers on exports, which would render their business uncompetitive, while simultaneously having to adjust to a new UK policy for funding,” the study concludes. “This could have detrimental effects on an industry – and rural communities – which needs long-term clarity and policy stability to adjust to the post-Brexit policy environment.”